Shoulder seasons are intended as another tool for private land owners to help manage elk numbers in hunting districts where they are over population objective. Even though FWP has repeatedly said that everyone, including landowners, is going to have to be part of the solution, and have encouraged landowners to allow access, some may still choose to charge for access.

To respond specifically to the question asked by some on the legality of this landowner’s offering:

No, it is not illegal for a landowner to rent a cabin and/or charge an access fee to hunt on his property.  That is no different than a landowner renting his property for grazing or harvesting a crop.  FWP does not condone access fees, but they are not prohibited by law and are not something FWP can regulate.

The Department and Commission must follow statutes and listen to all constituents when addressing issues.  Current statutes (87-1-321-323 MCA) require the department to manage game populations in a sustained manner and specifically, “the department shall consider the specific concerns of private landowners when determining sustainable numbers …”

As elk populations have been increasing in several areas game damage complaints have steadily increased.  In order to address this situation the department formed a working group to seek methods to address the issue.  The result of this working group was the shoulder season proposal which went through a rigorous public process before Commission approval.  Many people commented on the shoulder season proposal, both in support and in opposition.  The Commission ultimately amended the original proposal and approved what is now in place.  It is important to note that the current shoulder seasons are almost exclusively on private lands and have specific performance criteria that must be met for the shoulder seasons to continue. There are Commission-adopted harvest objectives and season set up for shoulder seasons that address this issue.  Basically, more elk have to be harvested than are being recruited into the population if FWP is to continue with a shoulder season in a hunting district.  If charging for access, or limiting access, or another similar circumstance, limits elk harvest to such a degree that harvest objectives are not met after three years (the evaluation period for shoulder season success), then FWP will not propose to continue the shoulder season and it will be lost as a management tool.

In the case of the newspaper advertisement that has been referred to it should be noted that this is one small landowner within HD 217. The district consists of over 100,000 acres of both private and public land.  This particular landowner has rented his cabin and allowed fee access to his acreage for several years – this is not new due to the shoulder season.  It should be noted that several other landowners within HD 217 who had either not allowed, or greatly restricted, access in the past opened their properties this year during the early shoulder season to harvest and disperse elk off of unharvested crops.  Although reports are that not many elk were harvested on the private properties (current reports are that 17 elk have been harvested on private land), elk were dispersed off of those private lands.

This message is intended only for the use of the individual or entity to which it is addressed and may contain confidential information that is legally privileged and exempt from disclosure under applicable law.  This information is not to be copied or distributed beyond the intended recipient.  If the reader of this message is NOT the intended recipient, any disclosure, copying, distribution or the taking of any action in reliance on the information is strictly prohibited. If you have received this communication in error, please notify this office by telephone.  Thank you!

Dear Governor Bullock and FWP, this just came to my attention in the Gazette. This is of great concern to me and others, as you know, from our public comments submitted on Elk Shoulder Seasons, taking advantage of shoulder seasons to profit from a public resource, capitalizing on this so called management.

In looking the phone number up, I saw a bunch of other ads.

Here is an ad for shoulder seasons for sale in the Gazette and a lot of other papers in MT. It's in the Chronicle, the Helena IR, Missoulian, Flathead Beacon, Hungry Horse Beacon, Daily Interlake, BigFork Eagle. 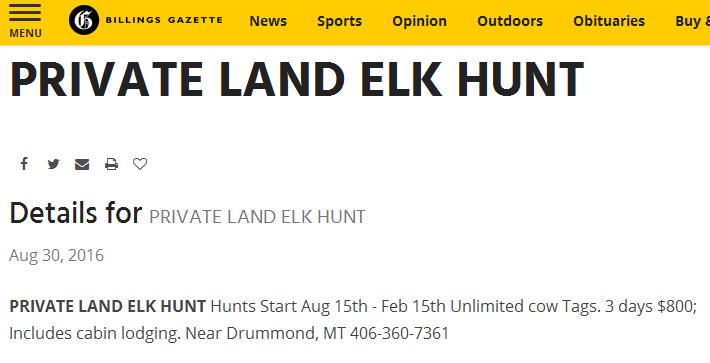 In 2013, the same phone number ran an ad for bull elk in the Missoulian